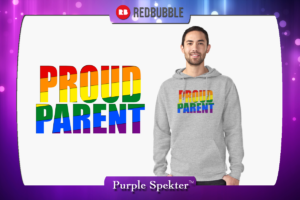 If you are an LGBT person…then surprise your parents with a colorful display of their pride that declares they are your PROUD PARENT.

I designed this art piece to make a powerful and beautiful statement for the proud parents of the LGBT community around the globe. Celebrate LGBT Pride with this colorful art series and be a PROUD PARENT!

Grab all FIVE books in the LGBT Guardians series, bundled together for the first time!

Be prepared to be riveted to the story till the last word!

This is an engrossing story that has not only kept my interest, but is so hard to put down, it has kept me up late at night.

OMG! This third story in this series will get your heart racing and keep it there.

Full of both action and adventure, you don't want to miss this book!

Tech talk, super-heroic philosophy, loving friendship, and teenage romance in a tale of responsibility and redemption. A splendid wrap-up to a fascinating series.